“Dead or alive you’re coming with me.” 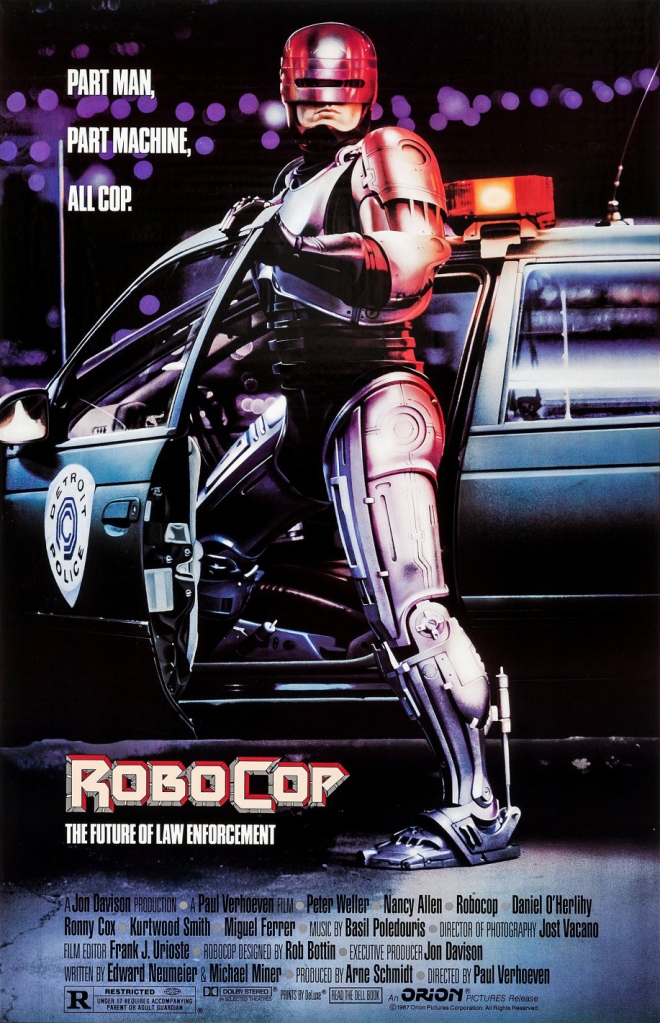 This gleefully violent sci-fi thriller about a murdered cop turned into a cyborg law enforcer has aged remarkably well, largely thanks to its satirical bite and Verhoeven’s film making chops. Not only is it an awesome barnstorming action movie, it is also a brilliantly made film. For all its cartoonish elements there is also plenty of heart, and a nasty edge to the violence that makes Robo’s eventual victory all the more cathartic. The guy is such a hero that there has been a long-fermenting plan to put up a statue in his honour in Detroit.

In the dystopian near future, Detroit has become a violent scum-ridden hellhole. The embattled police can’t cope so in steps megacorporation Omni Consumer Products (OCP) to offer a little cybernetically enhanced law enforcement. Their initial pitch, a walking gunship named ED-209, goes disastrously awry, leading them to seek a more “human” alternative – a cyborg police officer known as Robocop. All they need is a body to graft onto the tech… 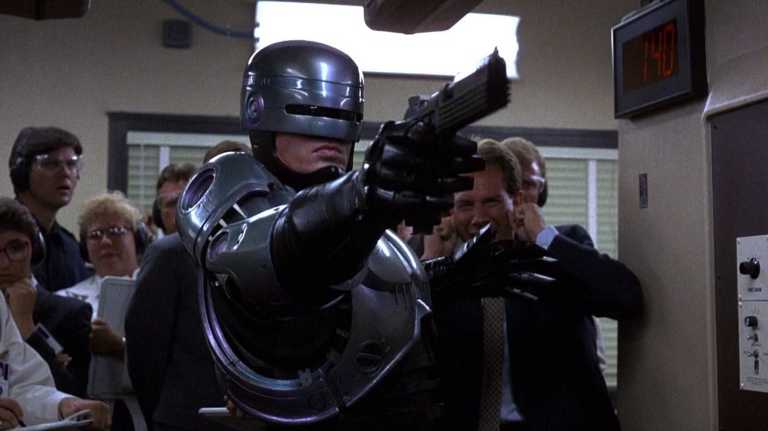 Enter Alex Murphy (Weller), a laconic straight-shooting cop heading out for his first day on the beat. He and his partner Anne Lewis (Allen) chase down a gang of cackling hoodlums, led by the sneering Clarence Boddicker (Smith). Without backup, they follow the crooks into an abandoned steel mill, where they are ambushed and Murphy is brutally murdered.

With their test subject ready to go, the ruthless execs of OCP turn Murphy’s bloodied corpse into Robocop, “the future of law enforcement”. He has had his memory wiped, but it turns out that the human soul doesn’t erase that easily, and Robo gradually rediscovers his humanity as he tracks down his killers…

Peter Weller does some remarkable work as Murphy/Robocop. With his eyes covered up by a visor for the bulk of the film, he manages to convey Robo’s confusion and re-emerging emotions just through the use of the lower half of his face, bringing plenty of pathos and making him a hero to really root for. It’s a very emotional performance, as he comes to realise what he once was and what he has lost, and that he can never go back. It makes his final kiss-off line a real punch-the-air moment.

On top of all that, Weller also took mime lessons to get a handle on Robocop’s movements, and there are some lovely touches, like the way his head turns first like a tank turret before the rest of his body follows. Nobody does the robot quite like Peter Weller…

Nancy Allen, shorn of her girly-girl locks that accompanied her star-making turns in films like Carrie, is immensely resolute and sympathetic as Murphy/Robo’s kick-ass partner Lewis. 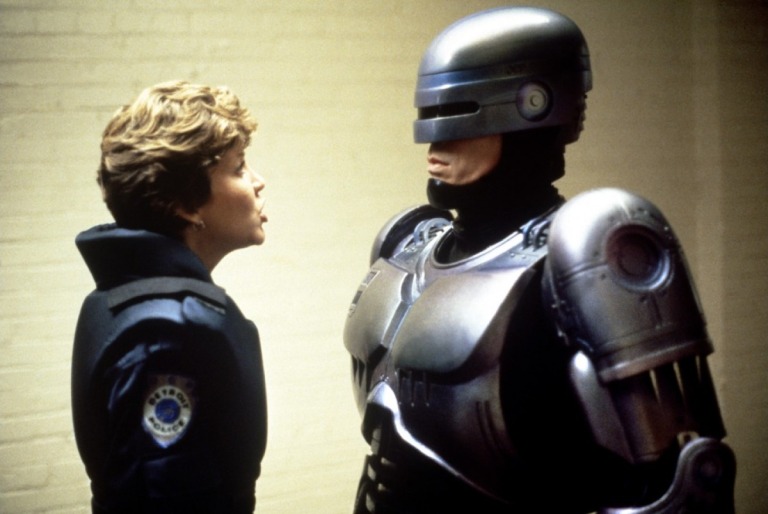 Robocop has an embarrassment of riches in the villain department, a rogue’s gallery of excellent character actors obviously relishing the chance to play the bad guy. There’s Ronny Cox as OmniCorp’s cold-blooded Senior President Dick Jones; Miguel Ferrer as Bob Morton, the oily exec heading the Robocop project; and best of all Kurtwood Smith as the utterly vile Boddicker. He relishes every line, from “Bitches, leave!” to “Ooh, guns, guns, guns!”

It’s a small role, but it is worth offering kudos to S.D. Nemeth as Bixby Snyder, a lewd, bespectacled TV personality responsible for the oft-quoted catchphrase “I’d buy that for a dollar!”

Basil Poledouris provides a superb score, reflecting both sides of Murphy’s unwitting Frankenstein’s monster. On one hand it is soaring and plaintive, reflecting his human side, while on the other it is grinding and mechanical, representing the cyborg he has become.

Robocop‘s violence still hits hard even nowadays. The cruel execution of Murphy catches my breath on every viewing, even having seen the movie maybe 20 times. It is dragged out to such a gruelling extent that it’s upsetting, which is exactly the point. We’ve just seen our hero brutally gunned down in the first reel, and now we’ll watch him rise. Without this terrible moment, Robo’s eventual victory wouldn’t play out so gloriously.

On the flip side, there is the ED-209 boardroom bloodbath, when the prototype robot shreds a hapless exec with countless slugs. It’s played for laughs, extending the massacre to a ridiculous length, followed by the deathless line – almost lost in the shocked aftermath – “Somebody wanna call a goddamn paramedic?” Apparently, Verhoeven toyed with a shorter cut of the killing but brevity made it seem even more brutal, so they stuck with the drawn-out version, which is perfect for the movie’s gory over-the-top tone. 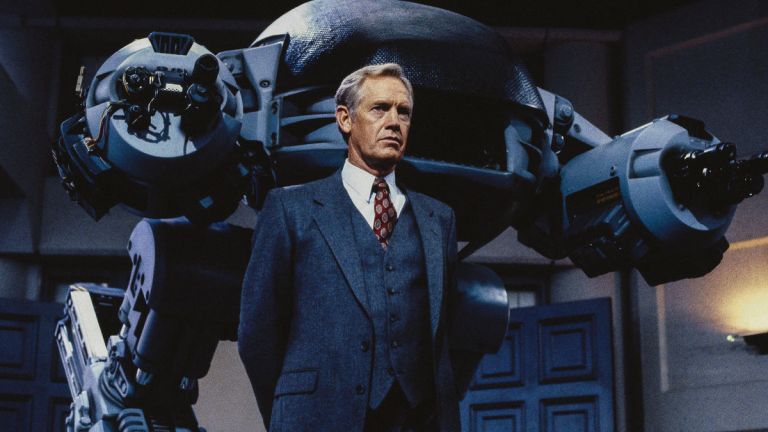 Robocop is fucking awesome. Verhoeven, with his outsider’s European sensibility, takes some huge swipes at Corporate America and lands every blow. His vision seems even more prescient today, with an increasingly militarized police force patrolling the streets of the United States. The commodification of violence reaches its logical conclusion in the TV spot for the boardgame “Nukem”, one of many neat little satirical touches.

Robocop is the real deal. It is satisfying viscerally, emotionally and intellectually, and has tons of heart for what could otherwise be just another big dumb guy’s movie. It’s a masterpiece of sci-fi action cinema.

Buy your copy of Robocop from Amazon HERE 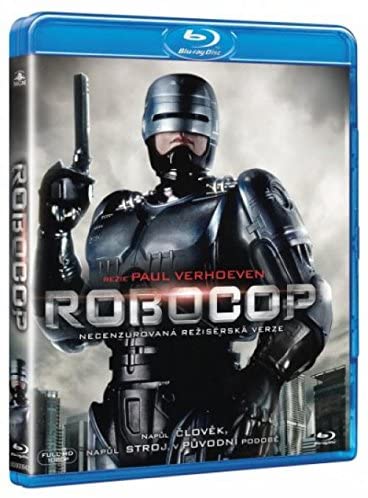